Saving Congress from the Establishment 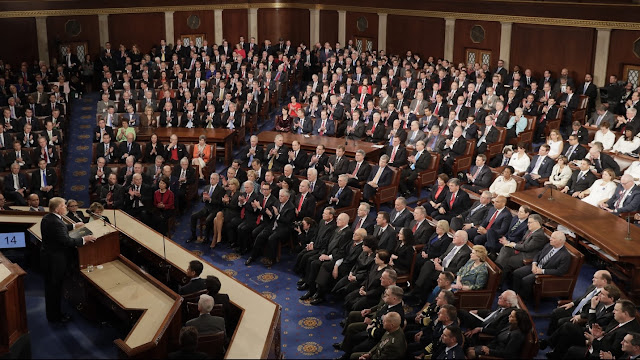 I continue to reel from the vision of this year’s State of the Union address.  What lingers in my mind is how sorry I felt for the Democrat Congressional contingent what was so prominently on display to the world as being stood upon by the jack boots of it’s leadership.  Normally the most culturally expressive of members on such occasions, they wore uniforms of black; conformism to a dogma of political correctness that similarly afflicts their camera ready cousins in the entertainment industry.  You could see the palpable tension between wanting to stand and applaud when President Trump’s speech mentioned things valuable to their constituencies, and, just as palpable, the inability stand and express dissent when their hearts so clearly wanted them to say so.  One could feel the heat ray intensity of their leaders  imposing discipline in the ranks burning the coating of the camera lens.  The world could see one half of America Congress teetering on the edge of control.  We gave our enemies occasion to laugh at the spectacle of it, almost waiting for a coup to explode or fail utterly delayed only by the transit time of the satellite link.  Alas, the outsider, the non-politician at the center of the night’s triangulation, won the lottery and stole the show.  Fade to black.  Disable the transponder. Carry on.

Between the lines, Congress has become an awful hostile work environment.  We see some of our most experienced public servants announcing retirements, seeking to leave at a time when the county is at a junction of cultural, technological and economic change; a time when we need our best and brightest installed in the offices of the Capitol.  But who can blame them?  Congressional leaderships has all but taken individual discretion out of serving their country.  Parties, left and right, gerrymander recruitment and seek out willing drones that will carry out the will of the inner circle, the sanity of that inner sanctum be damned; this is about the pursuit of power, blindfolded power.  Members of Congress are now expected to be pawns of their party’s agendas.  One cannot expect a truly free man or woman to be content under such an onerous dome.  And so they leave.  And so the American people will be served by drones.  The establishment consolidates.  “E Pluribus Unum”, out of many, one,  takes on a far darker meaning for the American Experiment.

It takes outsiders, people not afraid to stand and applaud America when she deserves it, regardless of which mouth the message came out of, to change this.  What I was from the State of the Union was a message between the line, it time to “Free our representatives to represent us.”  Party leadership methods are now mismatched to the needs of the Nation.  They are top down, as George Soros likes to say, “mafia like”.  He’s not that far off his description but even if he is hopeless blind to the fact that the mafioso’s are not in the White House, but in the upper echelons of Congress.  Step back for a moment and see what Thomas Jefferson would remind us is a basic “frailty of man”; after a while, all institutions seek only to survive and perpetuate their status quo, especially when has become hopelessly mismatched to the times.

The State of our Union calls us to demand a revolution within our own Congress.  That revolution, at it’s core, is the manifestation of Donald Trump’s clarion call, “Drain the Swamp”.  It means that the people who need to retire from Congress are not the disheartened rank and file but the stodgy leaders who have descended into a form of Stalinism in the hallways of our Capitol.  We need to replace that leadership with people who can work together again; people who cherish that being constructive means to serve the People.  And quite honestly, the only way to force that change in Congress is for the rank and file to tell the leadership to go pound sand when they try to impose non-constructive order.  Members of Congress, servants to the People, affiliation be damned, would be wise to take a lesson from Benjamin Franklin and watch the lunar cycle and meet among themselves in a new “Lunatic Society” to build the bridges their leaders can no longer fathom.

Come November 2018, the People too must stand up to this challenge.  The People need to take an interest in making sure that the supply of handpicked drones sent to Congress atrophies.  We need to vet every candidate for election and re-election asking, Are you human or rodent?  Are you going to Congress to work for us or for the establishment?  Are you qualified for this?  We the People, have a right to know.

Interestingly enough, we have the tools to do exactly this kind of national vetting this spring and summer.  We have the power of social media, a tool that has already produced so many grass roots revolutions much to the chagrin of other swamps around this planet.  There’s no reason that world should not remember 2018 as the year of the “American Spring”, when our Revolution was reborn anew, “E Pluribus Unum”, as it was always meant to be.

Think about it.  If we fail to act, we have only ourselves to blame.

Posted by Dennis Santiago at 5:57 AM