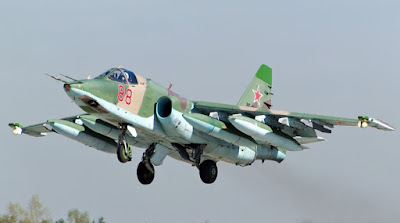 It started with one golden BB.  On February 3, 2018, what is believe to be a Chinese made FN-6 man portable surface to air missile, suspected to be in the hands of Jihadists, shot down a Russian Air Force SU-25 Frogfoot believed to be piloted by Major Roman Filipov, per reports by the BBC, in the skies above the city of Maasran in Idlib in rebel contested nothwestern Syria, near Aleppo.  Major Filipov ejected from his aircraft over hostile territory controlled by the Jabhat al-Nusra and was killed before he could be rescued in what is believed to have been a final gun battle.  Filipov becomes one more name added to the over 400,000 killed in Syria since 2011, per the UN.

In the days following this incident, more airstrikes have begun to pummel the landscape.  The Syrian government, always the most indiscriminate attackers, conducted air operations around Eastern Ghouta near Damascus in southwestern Syria for four days killing an estimated 200 civilians according to CNN.  East Ghouta had been an agreed to "de-escalation zone" per an agreement by Russia, Turkey and Iran in May of 2017.  Apparently, someone forgot to tell Syria's Bashar al Assad.

On February 7th it was the American's turn.  This time in the wild eastern part of Syria at Deir Ezzor by the Euphrates river where the forces of the Syrian Arab Army (SAA) loyal to Assad's government face off with the Syrian Democratic Forces (SDF) backed by the U.S. as part of the regional war against the Islamic State.  Following an unprovoked artillery barrage targeting the SDF's headquarters in Manbij  in northern Syria near the Turkish border, pro-regime militia forces attacked across the Euphrates River sending columns in the direction of a base at al-Tanf on the Syria-Iraq border prompting the U.S. Air Force to attack in defense of coalition forces. 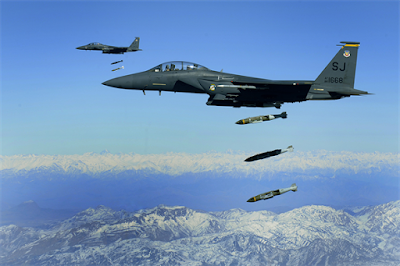 It's a bad idea to provoke an airstrike by the USAF on things that look like concentrations of military units, 100 of the estimated 500 pro-regime troops were killed, the rest retreating back across the Euphrates, the river that has become somewhat of an informal border between Alawite vs. Rebel contested Western Syria and Kurdish controlled Eastern Syria.

These incidents are really artifacts of the end of ISIS.  The tenuous coalition of "the enemy of my enemy is my friend" is beginning to fragment; it was always destined to do so.  Syria is a mess; a pile of shit holes.  Assad's Alawites control the western side of the country but only tenuously.  That Russian SU-25 was shot down in a rebel pocket of al Nusra, related to al Qaeda, right smack in the middle of Assad's sector of greatest influence.  Southern Syria might as well be an Iranian province.  The Iranians moved here taking good advantage of the turmoil with ISIS hoping to own and manage a swath of land from the Iraqi border to Lebanon; part of their dream to build a natural gas pipeline across the northern Middle East to supply the rich and energy hungry markets of the European Union. Northwestern Syria, most known for the city of Aleppo, is rebel country compounded at the very northern edge by a spat of pure animus involving the Turks and Kurds.  And finally, cutting the country diagonally, the Euphrates River separates eastern Syria controlled by the Kurds, backed by a United States led coalition to destroy the now almost completely destroyed ISIS.  Assad knows full well he is losing his country to several outside interests, allies and foes alike; few of whom he stands much of a chance to displace.  Syria isn't so much a country as it is a tapestry.

As the tapestry unravels, air power is increasingly being used to leverage the situation on the ground in an effort to preserve the boots on the ground lines of what was an alliance of convenience against the Islamic State.  My net assessment, barring some extra regional imposition of constructive direction, it's a hopeless fight against entropy.

This is the ugly mess everyone feared would happen to Syria in the power vacuum left by ISIS. The US and Russia are being dragged into a dangerous cat fight among rival regional interests dangerously including adventurism by Iran and Turkey.  Inside Syria, civilian are like lightning rods drawing the ire of every faction.  On the borders, the Israelis and the Iraqis have their hands full containing conflict leakage along their frontiers; Iraq potentially looking eastward at Iran as well depending on how stable the government in Tehran can hold it together.  Turkey's opportunism in northern Syria does not help the problem as Erdogan starts to act more like an Ottoman than a NATO member.

Compounding the mess in Syria, the United Nations is so neutered because of December's vote against the US over the embassy in Jerusalem that arranging peacekeeping via this path is almost infeasible.  Why the US and Russia are not cooperating to impose stability on everyone else forcing all of them to the negotiating table boggles me. There are Fulda Gap stakes in the offing here. Neither of these two nations have vital national interests here worthy of letting this flash point ignite.

And then there's this.

By February 10th, it's the Israeli's turn.  Containing "spill over" from the turmoil in Syria has been one of those things every country that borders it has been dealing with for years; Israel especially so.  It doesn't always work and when the daily tit for tat pattern fails, the sequence of events is always entirely predictable, overwhelming Israeli response.  This time the catalyst was an Iranian made drone that apparently few deep enough into Israeli airspace that it was shot down by a helicopter.  The Israelis watch their airspace like hawks so it's not a really good argument to say they didn't know where it was or where it came from.  Usual tit for tat practice on the Syria-Israel frontier is that the IAF follows up and bops you over the head for having jabbed them with a thorn.  This time, Syrian air defense, went all PVO, that's a term for the old USSR's air defenses, on the strike force of IAF F-16's hitting one. Scratch one Falcon.  It's the second combat aircraft to be lost to a surface-to-air missile over Syria in a week.

I first started tracking this last year when the Syrians and Iranians got all bent out of shape accusing the Russians of sharing Information Friend or Foe (IFF) codes for their surface-to-air missiles with Israel. Big acrimony.  Here, have some new IFF codes that we promise you the Jews don't have. Mischief managed. Carry on. I figured it was only a matter of time until the Syrian/Iranian forces in southern Syria would again try to see if they could pull off a wall of air defense test hoping to repeat the bloody attrition of the 1973 War in the Sinai when Anwar Sadat's forces turned most of the F-4 Phantoms and Mirages into scrap during the opening phases of that conflict.  That coil spring's been tensioned for a while.  The drone incident just catalyzed it.

This is not the benign airspace counter insurgency (COIN) environment of the Iraq and Afghanistan wars.  This is contested airspace.  This is the baseline technology of aerial warfare shifting in front of our eyes.  Old systems become obsolete and demand new innovation to carry on the business of warfare. The proliferation of modern surface-to-air missiles into the hands of the lowliest combatant is obvious. Less obvious, early unconfirmed reports have the Iranians/Syrians bragging about their air defense missiles shooting down "missiles"; that's implying intercepting standoff ordnance after it has been released from its carrier aircraft. If you please, note at bombs do not presently have jammers; something to think about.  If you're a "pro" at the Pentagon, you might want to draft one of those Mission Element Needs Assessments (MENA's) and start moving that through the system. Just saying.

As I send this article off to posterity, the Israelis are doing what they do best, hammering targets destroying Iranian and Assad equipment and stockpiles in southwestern Syria so the cycle can start anew.  Russian President Vladimir Putin has had a telephone call with Israeli Prime Minister Benjamin Netanyahu about not escalating things too much. Uh huh, wake up and smell the coffee; read between those lines already people. Iranian Revolutionary Guard Corps Brigadier General Hossein Salami prattles on about annihilating Zionists even as his own government teeters ever closer to not being able to afford this latest rendition in a long history of Persian overreach episodes. Everyone keep sending those Iranian protesters more free VPN's; there may be an "Iranian Spring" in the offing yet.  The United States and its latter day "Coalition of the Willing" make camp in eastern Syria gandering at Assyrians to the west, Ottomans to the north, Mesopotamians to the east, and a Persian outpost to the south.  Yup, the cycle begins anew in the former Garden of Eden.
Posted by Dennis Santiago at 5:02 PM