Cold Partnerships: The Complexity of Syria

On Friday April 13, 2018, US President Donald J. Trump appeared on television announcing the commencement of punitive airstrikes on chemical weapons research and storage installation of the regime of Syrian President Bashar Al Assad. Joining the US in the attack, the United Kingdom and France, struck in response to renewed attacks by the Assad regime against insurgents in the city of Douma located east of the Syrian capital of Damascus. A chemical attack on April 7th killed an estimated forty-two (42) people and effected degrees of injuries on up to 500 more persons following yet another breakdown in a Russian brokered cease fire between factions in Syria’s ongoing civil war. Images and stories in the aftermath highlighted the humanitarian cruelty of the Assad’s sectarian Alawites against their Muslim neighbors. Toxicology and treatment reports from the area reported the use of a nerve agent possibly combined with chlorine, apparently an attempt to conceal the deadlier compounds. The ordnance was reportedly delivered via the Assad regime’s favored method, Syrian Air Force helicopter dropped barrel bomb(s). Typical of the subterfuge that is the Middle East, cover up stories seeking to muddy the finger pointing as to who actually perpetrated the attack followed; a number of them designed to cause doubt that the insurgents themselves may have martyred their own in an attempt to gain attention on the world stage as government forces closed in. Planted pictures, the “fake news” of hacktivism and the exploitation of the internet.  You want to know more about how sophisticated that gets?  Google “Syrian Electronic Army”

The global response so far has been surgically forceful. If you examine it from all sides, rather cooperatively so. The Russians could not have been happy that their attempt at brokering a cease fire in a relentless civil war had failed yet again. The US, which the week before had been contemplating ramping down operations as the war against ISIS waned, found itself dragged into the troubles of Western Syria, where the US does not operate, to deal with a breach of the Chemical Weapons Conventions. The Iranians and Israelis, who had been playing their own tit-for-tat in southern Syria, found their squabbles on the global back burner. And even Turkey, itself embroiled in the sticky multi-national pickle in northern Syria dealing with the Kurdish question of a culture straddling three countries who would rather not have to deal with them except that they’ve managed to charm the Americans, found themselves having to think global.

The world began to maneuver recognizing that the nation of Syria, its civil war including all its factions, had once again crossed that mythical Red Line in the Sand. Except this time, the United States was telegraphing it as going to make good on the threat to pound that sand. In the week between the 7th and 13th the world saw a global negotiation via diplomatic, press and social media channels. Negotiated gruffly yes, but amazingly efficiently turned into an actionable “deal”.

There is no compelling global interest to take on the task of policing the civil war in western Syria. The “Deliver Us from Evil’ era of human rights interventionism of the last quarter century in places like Bosnia, Afghanistan and Iraq is over. This dispute is for the Syrians to work out for themselves. The world’s present-day mission is to contain civil wars, not end them.

Digging deeper, there is no compelling interest for non-Syrian regional players to attempt sudden gains in the regional “hill and valley” power matrix while this latest episode unfolds.  Consider,

The Iranians need a more stable Syria with a surviving Assad regime if they ever hope to complete their Shia Crescent hopes to reach the Mediterranean. Tehran’s main worry in the future is less America than it is whether America vigorously back the inevitable Saudi and Israeli opposition to the Persian dream.

The Turks similarly see no gain to upsetting the Syrian status quo to their south; they’re more worried that a break up of Syria would trigger a question of the Kurds in Syria, Iraq and Turkey demanding independence and possibly getting American help. This does not serve the Erdogan regime’s objectives.

The Iraqis just want to be left alone to rebuild their country on their own. Their fear is the “Wild West” might come across their border and infect them yet again. I once had a conversation with a diplomat where it came up that Iraq needs a, wait for it, “wall” to keep the Syrian mess on the far side of the Nineveh Plain from Baghdad. I did joke that they could try talking to the best wall builders in the Middle East about that. The response of a charming diplomatic smile noted that perhaps it’s a bit too soon.

What there is when you get down to the core is a compelling interest to act to curtail the continued use of chemical weapons within the Syrian civil war. That need is paramount regardless of who is perpetrator or victim. As in Frank Herbert’s “Dune”, in the end, there are no innocents here anymore. Only those who will die and those who will survive.

What bothers humankind is that there is demonstrated capability and willingness to use chemical weapons in the region. This cannot be allowed. The pathways of negotiation, even by a forceful presence like Russia’s, did not work. Sanctions did not work. Threats did not work. The next step of infrastructure destruction has become a necessity, not an option. It’s interesting to note on this point that the Russians could not themselves destroy Assad’s chemical weapons program, that job had to fall to the militaries of the West. Machiavellian. A turn, within a turn, within a turn.

The West did so with the bulk of the firepower supplied by the United States. Warning time was sufficient to allow the Russians to move personnel and assets out of the area, or at least into avoidable locations; an action that stripped Assad of the ability to defend himself when aerial attack finally came. Regardless of bellicose bluster, that chess converted a field of technically capable air defense assets into a motley collection of bottle rockets. I particularly liked the Russian statement that they would “defend themselves” as a cool nuance.

The telegraphy of statecraft is subtle and consequential. The dance between Trump and Putin as it played out, telepathic … and hopeful.  Within the Twitter storm of the past week, there was this. 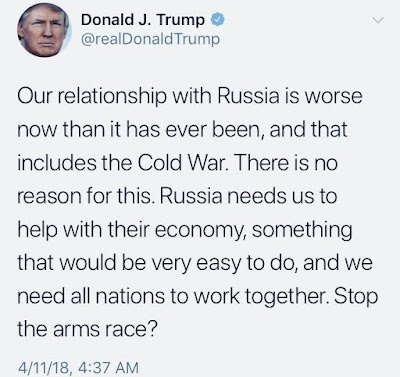 For now, mischief managed. Tomorrow? Well that’s another day in the former Garden of Eden.

Posted by Dennis Santiago at 3:28 PM No comments: