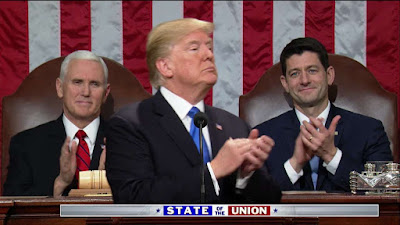 U.S. President Donald Trump delivered a powerful speech on January 30, 2018.   Speaking to a joint session of Congress, Trump enumerated a list of achievements since his inauguration that pointed to U.S. gains both domestically and abroad.  With the economy in rebound and unemployment falling, the President bragged about the financial benefits of his tax reform package for American families and businesses.  His presentation had the popular tenor of Reagan and Lincoln, speaking using language explaining the direction of the economy to ordinary Americans; noting that, corporate America had already heard, and was already responding to, his clarion call.

Internationally, Trump capped his Administration’s the nearly total rout of ISIS in Iraq and Syria by announcing he had signed an executive order instructing Secretary of Defense Mattis to keep the U.S. detention facility in Guantanamo Bay, Cuba open for business.   His message was clear, for terrorists, Guantanamo will be the end of the line.  The U.S. intends that if captured, they will live out what remains of their lives in captivity.  In other words, he’s created a tangible consequence and hopefully a deterrent to future radicalization threats against the United States in a tone that speaks to individuals contemplating terror. 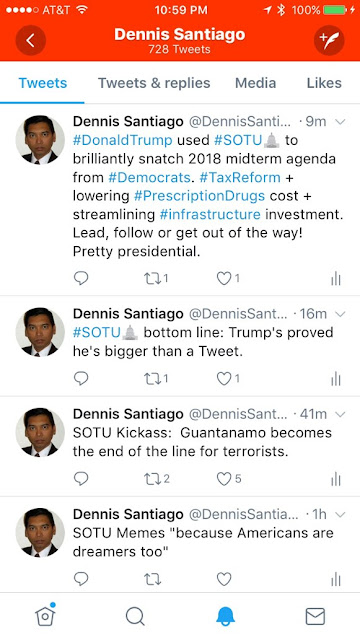 Against other adversary nations, Trump’s speech was more conventional in rhetoric criticizing the behavior of rogue regimes such as North Korea and encouraging popular liberation causes in places like Iran.  His speech may have specifically asked Congress to fully fund the US defense budget and invest in the modernization of the US nuclear arsenal; but his activist messaging directly to other nations clearly continues to show that the most potent weapon in his arsenal remains the diplomacy of “aggressive negotiations”.  Fittingly, cameras focused on U.S. Ambassador to the United Nations Nikki Haley as Trump made his remarks.

The President also took the time in his address to explain his immigration reform package directly to the American people.  He is clearly snatching the agenda away from Congress even as they debate the same topic working towards yet another continuing resolution to fund or shut down the government next week. He spoke that his four pillar proposal was a compromise.  His message was clear, neither theFar  Left nor the Far Right will be entirely happy; but, he intends to get a solution that will take immigration reform to a solution now and make it disappear from being a nagging wedge come the 2018 midterm election. The President’s first two of four pillars approach consisting of a generous expansion of DACA with a real path to citizenship on the one hand and full funding for border security on the other was classic “Art of the Deal”. His third and fourth pillar addressing visa lotteries and chain migration focused on the consequence effects of these policies. My guess here?  He’ll get pillars one and two.  Three and four are bargaining chips to get one and two.


However what really impressed me about the State of the Union address was Trump’s stunning, there’s really no other word for it, capture of the domestic quality of life agenda for 2018.  His call for a solution to the high cost of prescription drugs where Americans spend as much as $1 of every $6 of their medical costs according to a Tweet by Fox News on the heels of his statement put him in direct communication with ordinary Americans yet again.  His call to streamline infrastructure investment spoke to every frustrated state and local government.  And his acknowledgement that America has an opioid epidemic problem brought light to America’s penchant to sweep inconvenient truths under the rug.  These are clear markers of President’s “connected” leadership based on honest recognition of domestic issues; something much needed in America. 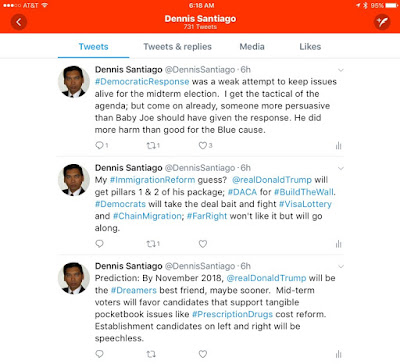 Applause by the Republican contingent and the audience in the gallery was enthusiastic.  Reaction by the Democratic contingent, not so much. As the camera’s panned, I was moved to Tweet, “That’s a lot of unhappy Democrats” earlier in the evening.  By the time I watched Joe Kennedy’s rambling response speech, I kind of felt sorry for the many loyal opposition Democrats that their leadership is stifling from participating more constructively in a bi-partisan process.

Given the momentum generated but Trump’s State of the Union address, it’s going to be an interesting 2018 in the United States of America.

Posted by Dennis Santiago at 4:43 AM