Trump’s Aggressive Shuttle Diplomacy; In Search of the Eurasian Border 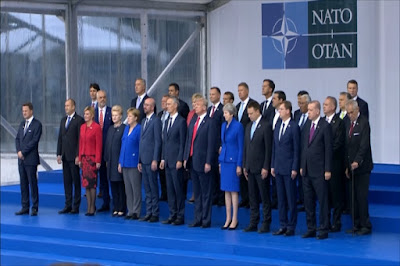 President Donald Trump continues to prove himself to be a diplomat who thinks out-of-the-box. The NATO summit in Brussels, despite all it’s testiness and recrimination by his detractors, brings up several realities that the alliance needs to deal with if it is to remain relevant as a contributing body to future world peace.

As a longtime analyst, NATO, in my observation, has been morphing away from being a purely defensive alliance to becoming a de facto expansionist one in the European theater. In concert with the economic agenda of the European Union, NATO has been expanding its presence into eastern Europe coming ever closer to the traditional influence sphere of Russia in the last 25 years. As eastern European countries have discovered the attraction of Western economic advantages, they have sought to join the military alliance as part of their migration from what was the old Warsaw Pact. This has led to some interesting political clashes in this expanded Europe that puts active socialist experiments in Western Europe in league with recovering failed communist experiments in Eastern Europe. Within this loose union, this new European landscape has proven to have all of the hill and valley complexities that have marked such matrices throughout history; and it is a tenuous matrix as best, as the world has witnessed the players within the EU/NATO system experimenting, sometimes dangerously, to define the future of their sphere of influence.
All of this ebullience has not gone unnoticed on the eastern border of the new NATO where the power shifts into the hands of mother Russia. In the minuet of set piece warfare that forms the long wave undertone of conflict for Europe ever since the end of the Hundred Years War, these subtle border shifts expanding eastward have the net effect of an invasion not unlike the threat of Operation Barbarosa was to the motherland’s Steppes in the mid-20th Century.

Russia, for its part, has sought to adjust and consolidate its latter day version of a Maginot line making shifts to territorial alignments to fix haphazardly drawn borders from the aftermath of the Cold War. This has caused, and will continue to cause, a growing tension between the evolving nouveau Europe, a $14 trillion GDP federation, and the prideful but poor order of magnitude poorer eastern empire of Vladimir Putin. This economic disparity makes for a very real and volatile border tension reality.

But wait. Let’s take a step back for a second from our perspective as the outside third party. What is the national interest of the United States when looking at the evolution of these two very important spheres of influence that characterize most of the northern half of the Eurasian continent?

Clearly, we see value in both of these power spheres. We have a long history of interaction with both western Europe and Russia. We have cultural and strategic reasons for wanting to have productive relations with both. Simple pragmatism dictates that EU/NATO and Russia are both equally vital to our strategy to ensure global stability and world peace. These two spheres, along with China, are the fundamental building blocks of a likely future northern alliance that could at some point replace the peacekeeping function of the United Nations; an organization now suffering from the ill effects of too much autocratic world mediocrity and prejudice disguised as international democracy. Therefore, it does fall to the United States to be the bringer of tough love to the alliance.

And that is precisely what the president of the United States did at the NATO summit. President Trump recognized the self-interest of EU/NATO Europe to build a sphere of influence within which its evolving federation can grow. He then pointed out that if this is the aim of this new EU, it would have to fund it’s military border with the Russians much more indigenously. In his policy position, it is apparent to me that Donald Trump did the calculus of deterrence. It’s not that hard. He spelled out to the Western Europeans the simple formula that a 4% of GDP commitment to military spending is what it would take to sustain a fully credible deterrent of the type that would stabilize the border between the Western and Russian spheres of influence. It’s a simple global stability equation; one that both the Europeans and the Russians can, and very well do, understand. Mr. Trump, who if you haven’t been reading Twitter, understands that plain and direct messaging gets results when it comes to asserting influence, set the 4% line because it is a plain language message that even economists would understand. Yes, that was a dig. Here is the simple math. 4% of the GDP of Western Europe in aggregate spent on defense is roughly 50% of Russia’s GDP. It creates the conditions for resilient stability; an overwhelming deterrent advantage in the mission to stabilize a sphere of influence border.

Mr. Trump further recognizes the dangerous nuance that the spending pain by NATO has to be equitably distributed among all of the members. It creates this business concept called “buy in”. It is astute acumen by Mr. Trump. Every student of military history that has studied Europe knows that a failure to ensure parity in participation eventually leads to disastrous outbreaks of European warfare. Don’t repeat the League of Nations mistake; it’s bad. It was clear to me in Mr. Trump’s messaging that he had thought long and hard about far more complex elements than people give him credit for. The summit ended with grudging pledges of new commitment. President Trump called it a success; probably more of a strategic success that an everyone feels good one. As they say, sweat equity.

Back to all about “US”. What does that buy the national interest agenda of the United States? In global stability, everything is an enabler. Things are a turn within a tun within a turn. The next logical step is, for anyone paying attention, already coming into play.

On July 15 in Helsinki, Mr. Trump will meet with Mr. Putin in what will be a private bilateral relations discussion between two major military powers and world affairs influences. The USA will ponder thoughts with the nation most critical to enabling global stability in the lower 2/3 landmass of planet earth. It’s a tumultuous co-dependency for sure; but then again, so was perpetuating a Cold War for decades while waiting to find out if the Reich would rise again? What? You didn’t think that was a big part of why we both did it?

Economically, it’s another order of magnitude disparity. The US with it’s over $16 trillion GDP dwarf’s Russia; although, the two leaders do share parallel concerns about certain portions of their federations being economically problematic. Housekeeping is a universal pain it the butt. Still, President Trump will be bringing the vast richness of the United States, who’s GDP as a single nation equals and exceeds the entirety of Western Europe’s; and is matched by only one other trading partner, China, to the chat room. Economically, it will be a giant sitting down to talk to a dwarf, a very prideful dwarf. Militarily it will be a unique peer like no other on this planet having a heart to heart discussion about what to do to bring peace to troubled regions in the world; with the combined imperial power to make those changes happen.

I understand that the news media is captive to reporting the blow-by-blow minutia of events as they unfold. But this is not the way to view these events. This is more like watching the story arc of a grand play unfold. Ultimately, it is left to us, the citizens, to discern the movie from the soundbites.


Posted by Dennis Santiago at 4:26 PM