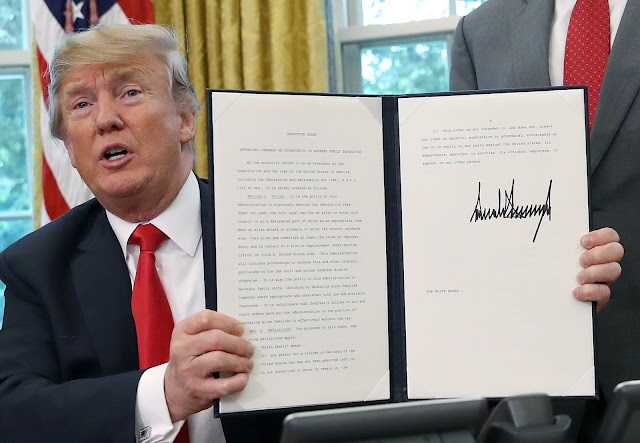 US immigration policy has had a rough time of it lately. On January 30, 2018, President Donald Trump asked Congress to pass comprehensive reforms on immigration trying to end an arduous era of border policy by executive order that began long before his administration. So far, no joy as Mr. Trump faces bi-partisan opposition in the Legislative Branch seemingly more incentivized to kick the can down the road so as to preserve the immigration issue as a talking point for electoral politics. This has forced the Executive Branch to go back to effecting border policy via Executive Order; and oddly, put @realdonaldtrump, as the President is known on Twitter, in the same less than desirable muddling box as his predecessor Barack Obama.

Mr. Trump and Mr. Obama both share episodes of dealing with families arriving on the US border seeking asylum. Mr. Obama’s problems occurred in 2014 when a wave of people fleeing turmoil in Central America reached the US border after traveling through Mexico. The event overwhelmed the US Department of Homeland Security (DHS) Customs and Border Protection (CBP) and Immigration and Customs Enforcement (ICE) Services as well as the those of the US Department of Health and Human Services (DHHS). The result was a rash of family detentions triggering the issue of child separations that Mr. Obama’s administration, also getting little help from Congress, coped with via Executive Order as it sorted out who could stay in the US and who had to return to their countries of origin. In Obama’s case, after trying to separate children and failing, and unable to detain entire families while their cases were pending, the federal government ultimately decided to use a form of electronic hostage taking as part of its enforcement strategy. Obama instructed the federal apparatus to place ankle tracking bracelets on the legs of the mothers, a direct threat to the central figure of these family units.

In 2018, the US formally changed the authorized ceiling of the number of refugees allowed into the country radically cutting the figure. This recognizes a policy change that began with the new administration that shifted US protocol from attempting to fill quotas to the maximum each year to one of practicing a higher-degree of scrutiny in who qualifies for the US refugee program. It is important to note that this pattern of “extreme vetting” has manifested in other ways including Trump’s day one ban on entry by persons from certain at-risk nations know to be sources of radicalized terrorism; a national security policy that was also pursued with less success by Trump’s predecessor Obama. In case you haven’t figured it out yet, presidents are, in the end, caretakers of national interests that precede and survive their tenures.

Mr. Trump’s administration now faces a new recourse dilemma triggered by a toughening of US policy in the direction of “enhanced scrutiny”, or using media’s adopted the hyperbole term from school politics, “zero tolerance” policies on the border. In Mr. Trump’s case, the shift in policy has run into same double-edged sword that beset his predecessor. The problem is triggered by a mismatch in timing in how US law works.

The stress on the system today, as it was in Obamas time, is that there’s a Judicial Branch court order that impinges upon the I.N.A. timeline. It starts in 1985 when the daughter of actor Ed Asner’s housekeeper was detained by the then US Immigration and Naturalization Service (INS). Her name was Jenny Flores. Jenny’s father had been killed in El Salvador and she was attempting to join her mother in the US, an illegal immigrant worker in the employ of Mr. Asner. The case exposed a problem of long term indeterminate detentions of minors in inadequate facilities within the INS system.

Initially adjudicated in 1987 during the Reagan Administration, it wound up a decade later in 1997 at the US Supreme Court where the Clinton Administration agreed to a settlement, the Flores Settlement, that would have far reaching implications. The Flores Settlement bars the detention of minors for more than 20 days and requires that children be held in facilities licensed as state-approved daycare centers, barring special circumstances.

This mismatch of timing caused Mr. Obama to take mothers as hostages because he could not get the courts to budge and is now causing Mr. Trump to pursue political lighting rod changes to US law. As part of the Executive Order to detain families together, US Attorney General Jeff Sessions is once again asking the US courts to adjustment the Flores Settlement. Mr. Trump is trying to avoid Mr. Obama’s jewelry solution; but he’s got to go through the US 9th District Circuit, one of the most activist in the country. My guess is it won’t end well.

That’s not the problem. This is! We are dealing with these people on the wrong border.

The international law on asylum is that the asylum seeker is supposed to present themselves to the authorities of the first international border they reach upon fleeing their countries. For Central Americans, that country is Mexico; specifically, the southern border of Mexico. The way it is supposed to work, that country, with aid from the international community, is supposed to set up refugee camps. It is from these camps, that other organizations such as the US Office for Refugee Resettlement are supposed to process persons to qualify them for movement from the camps to a third host nation. If this were the Middle East, the analogy would be people in Iraq and Syria fleeing ISIS going to U.N. camps in Jordan.

I do not understand why the US is not insisting that these conventions be followed. This is not a money issue. The US is a rich enough nation that we have the money to support such refugee camps unilaterally; heck, we pay for most of them around the world as it is. They are a good idea given that other Central and South American countries teeter on the edge of collapse of the kind that can and will lead to mass exodus.

One would think that the U.N. Commission on Human Rights would be all over this. BUT NO! Ok, so the U.N. are a bunch of useless puds as Secretary of State Mike Pompeo and US Ambassador to the United Nations Nikki Haley are quick to explain. Well fine then. To heck with the U.N., there’s the option of solving this as an Organization of American States (OAS) issue where, again, the North American economies can well afford to implement asylum infrastructure in the Western Hemisphere without needing help from the rest of the planet thank you very much.. Why is this not a top of mind conversation?  Why is this not part of the media narrative?  Why isn't this what gets asked about  on in Congressional hearings?

Personally, I’d advice President Trump to go all out on Mexico using trade and tariff leverage while offering the carrot of relief if Mexico cooperates in doing its part to set up proper refugee infrastructure to make the Organization of American States Great Again … so to speak.

Posted by Dennis Santiago at 5:33 AM

Dennis Santiago
Dennis Santiago is a life long public policy analyst with a background of contributions to U.S. national, foreign and financial policy as well as a C-suite technologist with a history of innovation going back the the 1990's era of the Internet. Mr. Santiago presently serves as the Managing Director for Research and Development at Total Bank Solutions LLC responsible for developing new financial product instruments and financial technology infrastructure solutions. He is the author of the Bank Monitor system in use by federal, state and financial institutions to assess the safety and soundness of U.S. banks.