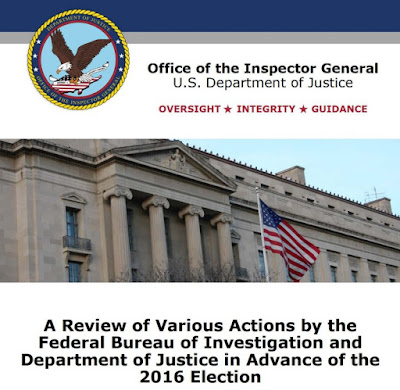 The Inspector General’s Report finally arrived.  The long-awaited proof of the powerful conspiracy to whitewash the “gross negligence” of Hillary Clinton.  On first pass, it’s a bit of an anticlimax play that speaks so much about the frailty of man in the face of power as Thomas Jefferson used to put it.

Dramatically, the saddest part in the 528-page report is a direct action by a Clinton.  Specifically, former President Willian Jefferson Clinton, imposing himself in a meeting with Attorney General Loretta Lynch on the tarmac in Phoenix.  The meeting “went on and on” saying nothing.  It created discomfort to the point that Lynch sought the advice of the ethics counsel and ultimately steeled herself to accept whatever the FBI recommended be done about Mrs. Clinton.  The reading between the lines is clear.  This chapter of the report is a love poem.  It’s a story about a man who knows the woman he loves has done something terribly wrong begging for mercy; how the mighty do have feet of clay.

But it’s also clear in this report that the double standard of behavior for public figures is a chasm from the public's.  The IG’s report’s preamble goes to great pains to says it avoids second guessing the course and outcome of the Clinton email investigation.  It mentions, but does not opine, on the pattern of mitigation of interpretation of US law that ultimately not only resulted in a declination to recommend prosecution but the removal of language in describing the offense that would have argued strongly in the opposite direction.  My fairness opinion on this after reading the applicable law is that someone should have gone to jail for violating 28 CFR 793(f), the "gross negligence" provision. That public figures get a pass on actions that would send ordinary Americans to federal prison is a cancer that begs introspection.

The eye of this storm in this report was James Comey.  He is the central actor in the play.  The one who’s choices caused everything else to pivot around.  The IG report is not wishy washy at all about its conclusion that Comey screwed the pooch twice by acting out of school when he should have followed procedure. Both times he committed failures of hubris speaking out of turn and bypassing chain of command.  The IG is correct in counseling that he should have gone by the book and let the external realities of the case wreak whatever havoc they should have.  The bottom line lesson for the future is that it’s better to let legitimate scandals happen than create artificial ones inside your own head.  It undermines trust and is an example of elitism in DC at its worst.  Sadly, it’s also petty.  If Comey had trusted in the design of how government and law are supposed to work in this country, much of this would have been different.  In theatric translation, where Loretta turned a deaf ear to Bill, Jim gave Hillary his heart.  Jim chose poorly.

As a result of Comey’s choices, the FBI was reduced to mediocrity, not by bad personnel, but by aimless purpose. That the IG found so many actions questionable and unconvincing should be no surprise; when you don't have equal protection under the law, clarity turns to mud.  Governance and law give way to politics and gossip; an entire country takes a ride on a roller coaster it didn’t have to. And here we are still in denial that 28 CFR 793(f) needs to be enforced.

As to the many supporting actors, Washington D.C. is a town of dangerous political diversity. It remains best navigated with bourbon and cigars.  There's nothing wrong with this. The system is designed to operate well as long as the wall between private like and professional conduct is maintained. Most people do so in the Beltway even as they enjoy the salacious aspects of capitol culture. That players will falter here and there is normal. Catching and counseling them is normal too. I did not really see that there was much more than common garden variety human frailty at work here.  Lovers get careless and mix play with their work. That doesn’t make them bad people.  Gossip worthy yes; but not enemies of the state. The system has the capacity to tolerate such humanity and keep working as long as leadership insists on professionalism in official activity.  The lessons documented in this part of the IG report applies beyond just the FBI. The IG is right to call for tighten up the ship.

Posted by Dennis Santiago at 3:52 PM