"All About Vlad"; What I’d Like to Ask Vladimir Putin If I Could Interview Him 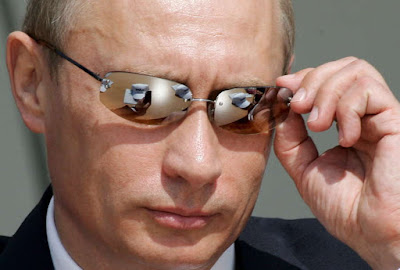 We recently passed the equinox of the Cold War. The Berlin Wall has now been down longer than it was ever up. And the European landscape is once again returning to it’s post-Hundred Years War pattern of smaller political rifts and incremental border movements that it has used to blow off steam since 1,453 A.D. Cities like Sevastopol are once again fought over like the days of old when Hapsburgs went tit-for-tat with each other over strategic towns and valleys. Byzantine intrigue emerges again, the cloaks and daggers of spies replaced by the apparent surgical use of weapons grade toxins. The dour of Theresa May addressing Parliament has the indignant ring not heard in the House of Commons since Margaret Thatcher. The Romans would be proud at what the Romani have rediscovered.

The Russian Federation is a perplexing nation still caught, even after all these years, in the fallout of the Cold War. It’s predecessor, the Union of Soviet Socialist Republics, cratered spectacularly many years ago after the Berlin Wall fell and the Warsaw Pact vanished from the face of the earth. It’s $1,283 Billion (USD) GDP in 2016 is a dwarf compared to economic powers such as the United States’ $18.6 Trillion (USD), the European Union’s $11.8 Trillion (USD) and China’s $11.1 Trillion (USD) GDP’s in the same year. At barely three percent (3%) the wealth of it’s competitors, it’s the Duchy of Grand Fenwick from the Cold War era film “The Mouse that Roared” starring Peter Sellers. But this movie now stars Vladimir Putin and he is no mouse.

Putin is a complex man with a complex problem. He strikes me as a cross between the fiery bluster of Nikita Kruschev and the broken heart of Boris Yeltsin. He promotes the image of a strong Russia worthy of respect, which it does deserve; but his methods seem to harken back to times when the Soviet Union was run using the designs of a more dictatorial Stalinist state capitalism. He’s seen the economic dreams of his country stalled and thwarted, often by circumstances beyond his control; sometimes by the work of his own, at times overly prideful, hands. Only ten (10) of the eighty-five (85) districts of the Russian Federation are solvent. The poverty rate is at least twice above levels it should be to create the conditions under which a modern first world nation with a constrained elite, burgeoning middle class and high employment rate working class can be a truly self-sustaining economy. Every year that goes by, Russia’s 3% of the GDP of its most important blocks of competitors for global influence creates greater necessity to roar with bravado rather than walk quietly with a big stick.

And he can be clumsily shifty; something that the Obama-era played down but the more pragmatic and tangible result-oriented Trump-era shows little tolerance to put up with. His political apparatus can at times seem comedic, like Boris Badenov and Natasha Fatale from the old Rocky and Bullwinkle cartoons, were it not also as deadly as Turkish Prime Minister Erdogan’s National Intelligence Organization; with similarly disastrous results in foreign relations that just make it harder for Putin to reach this heart’s national vision. Overall, it’s not a globally stabilizing path.

So the first question I’d like to ask Vladimir Putin is “Can you swallow your pride to reach a better tomorrow?” This is a question not so much for Mr. Putin himself but for this government and its apparatus. The blustery fire resurgent in Russia today is about as effective as the 1950’s Soviet attempt to blockade Berlin. Once again, it’s causing the world to build a new wall. The world, even a Twitter speaking pragmatic Trumpian world can still smell a Red Menace with there’s one in the room; and it will protect itself reflexively from it by isolating the source and cause of the bravado. It’s beginning to happen to Russia as deteriorating trade agreements, narrowing diplomatic ties and confrontive deterrent force postures begin to build and erase the “peace dividend” that people like Ronald Reagan and Mikhail Gorbachev worked so hard to assemble. This is not a good thing for the 85 districts of the Russian Federation. It’ll leave them poorer and more isolated from the global economy; maybe even less well off than the sacrifices made to endure the Great Patriotic War of 1941-1945.

Russians went on to be the poorest of the members of an uneasy Cold War era that, quite frankly, had a lot to do with creating a world where it would be impossible to create any more Third Reich’s or Greater East Asia Co-Prosperity Spheres. The Russians still wait for their turn, to borrow a term from America’s past, for Reconstruction. But it won’t happen if Russia’s leadership remains prideful. And Vladimir Putin, because of his position, is the man on the spot to either change that path so that Russian pride evolves to for better or degrades into another half century of worsening quality of life for his nation. I’m really curious to know how he and his apparatus sees this challenge they have no choice to face.

And then I’d like to ask an even tougher follow up question. “For the good of the Russian people’s future, are you willing to do what it takes to obtain ‘Most Favored Nation’ (MFN) trading partner status with the United States?” This is a powerfully loaded question. One I’m sure that would not be lost on Mr. Putin. MFN status is the modern equivalent of the US post-World War II Marshall Plan that rebuilt Western Europe and Japan from ruins. The conferring of MFN would establish pathways to create free trade zones with preferred trade and tariff treatment with each of the 85 districts of the Russian Federation. It would raise the standards of living in these districts and create tangible pathways for each of them to become part of the first world economy in ways presently impossible as long as their survival stems solely from the health of their central government in Moscow. For the US, it would create a vast new trading partner that over the next fifty years would almost assuredly blossom for both economies. It’s not unreasonable to envision a future Russia with GDP’s in the $4 to $10 Trillion (USD) range under such bilateral conditions. It’s probably the single most unfulfilled “peace dividend” on this planet from end of both the Second World War and the Cold War.

Are there implied demands that would come from the US to grant MFN status? Of course. Ensuring graft and corruption are nowhere near the economies that would emerge in each of the economic free trade zones so everyone feels comfortable that the risk-reward economics meet competitive world standards is one of them. Altering the behavioral culture of Russia’s central government from one that still believes it is fighting the shadow puppets of the Cold War to one that is focused on being a fully participating member of a hegemon free economic circle of trading partners is another. Put more bluntly, it demands that Russia take the therapy it needs to move beyond the PTSD of losing the Cold War.

One day, I hope to hear Mr. Putin’s reply in person. To be honest, I’d really like to ask Donald Trump and Xi Jinping what they think of the same questions.
Posted by Dennis Santiago at 2:04 PM