“Getting to Yes”; Getting a Little Closer 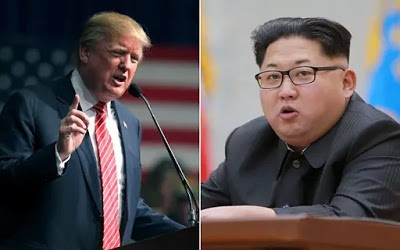 Global stability is a titanic art. Planet earth is witnessing an earthquake on the 38th parallel. A man made one orchestrated by U.S. president Donald Trump. Since taking office, the president and this team, including Secretary of State Rex Tillerson, Secretary of Defense James Mattis, and United Nations Ambassador Nikki Haley, have labored tirelessly to create a “peace through strength” opportunity for the world in the Korean peninsula. Along the way they have garnered the cooperation and assistance of Chinese president Xi Jinping and Russian Vladimir Putin to coerce the Democratic People’s Republic of Korea, also known as North Korea, and its leader Kim Jong-un on a path towards de-nuclearization, peace and normalization; including even the possibility of the peaceful re-unification of the entire Korean peninsula.

I first wrote about this possibility in January 2018 in an article “Getting to Yes”; Can Donald Trump Manage the Ultimate “Art of the Deal” and bring Korea to Camp David?”(1) After a year of global pressure, the thaw in the ice happened, poetically, at the Winter Olympic Games in Pyeongchang, South Korea. The two Koreas, countries divided against their will in the 1950’s by a Cold War among the very powers now coercing the north, basically said “WTF, let’s talk.” To the horror of US hawks, South Korean president Moon Jae-in combined forces with North Korea creating goodwill teams and contingents to participate in the Olympiad. American delegations, including Mr. Trump’s daughter Ivanka, stood in assigned positions next to North Korean general Kim Yong-chol at the closing ceremony on February 25, 2018. All the while, the Koreans talked, like two long lost families meeting anew. Barely eleven days later, Kim Jong-un offered to meet with president Donald Trump. That meeting will happen by May of 2018.

What does it mean for the United States to have a provocateur President? What can a Nation accomplish when it looks at old problems with “out of the box” eyes? What pathways to global stability are open today that were not open when America led incrementally? As noted earlier, American hawks, our crusty contingent that see the world through the lens of the Cold War are aghast at the possibility that a fundamental global stability paradigm they use to frame the meaning of “US leadership” in the world might change pivotally. A world where the 38th parallel is just another mile marker on an empty road to another town is scary when all you’ve known is a world with a Red Menace the speaks in sinister Russian and Chinese tongues. A world where conflicts are economic not nuclear. Back in the 1990’s, theorists that studied post-Cold War global stability organizing alternatives for the planet would describe this as a northern powers option.

We see other artifacts of this “northern” option in things like the emerging steel and aluminum tariff battle between the United States and China. Both countries are struggling with the same question of the sustainability of their base industries even as the global economy in finished goods continues to seek less and less friction to benefit a free market. Neither country has really explained well to their people, or to each other, why it’s perfectly fine to fight over adjustments to tariffs about the things like raw materials such as metals until a sustainable balance for every nation’s domestic, import and export industrial bases are in good order.

Actually, I have to interject that I’ve sort of found the US argument about needing enough steel plants to sustain its defense needs is a weak one in my opinion. I think the there’s a much stronger economic case to be made that the US wants, no needs, to claw back outsourced labor into its domestic economy and create local sources of raw materials supply with which to build the next 50 to 100-year generation of American cities, infrastructure and quality of life. This is something the Chinese can understand, because, they’re doing the exact same thing in China. I respectfully suggest that both nations may do better the rest of this year to negotiate with cooler heads with regards to their practical needs. These are year 2050 and 2100 strategic planning concerns that both countries have vital national interests in finding ways to coexist.

President Trump has a unique opportunity here to frame future coexistence between the Chinese and American economic engines in the context of his domestic infrastructure agenda. If he can find the right champions to explain and campaign it to the US Congress and the American people, despite all the hawks and protectionists that will attempt to derail it, he stands a chance to place the Pacific Rim of planet earth on a better path for posterity. Not a bad “nice to have” created by the catalyst of thinking out of the box with North Korea.

And then there’s Russia. The country that wears the “Scarlet Letter” on its chest, the Red Menace itself. The pinnacle of hawk fears and without whom the next step of demobilization of military might from the end of World War II would turn into plowshares. It’s president Vladimir Putin, a former KGB officer, plays the role of Dr. Evil in an ever more mediocre rendition of smaller and smaller Fulda Gaps. I wonder if America will ever be able to look beyond the bluster of an echo of Nikita Kruschev that Putin plays up in his role as leader in Russia to also hear the hopes of a Russian patriot who cries to improve the quality of life of his people the way the world once heard Boris Yeltsin cry at the door of a Texas supermarket. They are so loud because they have so little. Russia has a $1.283 trillion dollar GDP compared to the US $18.57 trillion dollar GDP.

Drowned out in the bluster of Putin’s March 1, 2018 speech announcing the defiance of a new generation of destabilizing nuclear weapon delivery systems to put the US and the EU on notice that Russia is not to be trifled with in it’s agenda in places like the Ukraine and Syria, I listened to the other half of Vladimir Putin’s address to his nation. His vow to raise living standards for the people of Russia was just as passionate, I thought maybe even more so. Definitely a mix of Kruschev and Yeltsin in that speech. The press reported on the salacious half of course. And I’m told that true to the Russian sense of humor, the jokes about he’ll raise the standard of living by declaring the poverty line to be half what it is now immediately rang across the cities and villages of the former Soviet Union. I thought that was funny because that’s kind of what the US did by manipulating unemployment figures to only count people actively looking for work as unemployed.

But let me end this week’s column with a message to President Trump and his cabinet. There’s an asymmetric response to Putin that I believe should be explored that would benefit the US and improve yet another global stability facet on the planet.  Consider the possibility of not responding to Russia one dimensionally by deflating his bluster about weaponry. To be sure, American weapon systems technology can respond to almost any Russian weapons initiative. That’s not the problem. Humiliating the Russian military gaining no diplomatic or arms control progress between the two nations is a problem; that is not a path to peace. If I may suggest, look at responding economically.  Not with sanctions, but with carrots. In exchange for not developing this next generation of advanced nuclear delivery technologies, that could very well proliferate to rogues, offer to set up free trade zones within Russia where the US can help improve the quality of life of Russians. Demand corruption free guarantees be made by the Russian government as a condition for the US to help. It plays onto the Kremlin’s needs and desires anyway and they can use the US as a lever to accelerate their clean up. If we do something like this creative version of a latter day Marshall plan, the US potentially gains a preferred export market that would further the agenda of consolidating a stronger US industrial base. I believe this is worth looking into.

I also believe it would create an even more compelling “peace through strength” hand for the United States in May when “Donald the Strong”, as the Chinese call him, meets “Rocket Man”. That just sounds so delightfully WWF doesn’t it?

(1)  “Getting to Yes”; Can Donald Trump Manage the Ultimate “Art of the Deal” and bring Korea to Camp David?, January 23, 2018, Dennis Santiago, Picking Nits, http://www.pickingnits.com/2018/01/getting-to-yes-can-donald-trump-manage.html

Posted by Dennis Santiago at 9:52 AM