Unable to Please Everyone, Theresa May Gives Up

Originally published on May 24, 2019 on America Out Loud,
https://americaoutloud.com/unable-to-please-everyone-theresa-may-gives-up/ 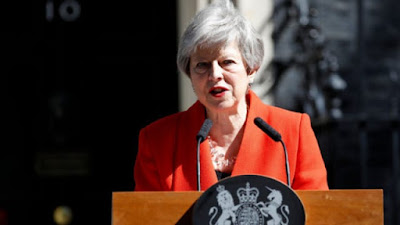 “Is this like Brexit?” That was the question every Briton asked me and my American companions on November 8, 2016 as we sat at a bar in in London watching the television coverage of President Donald Trump’s win. We were loud, boisterous and irreverent⏤bantering about when Hilary Clinton would come out of hiding and concede. The reserved Londoners looked at us with their stiff upper lips, probably murmuring about what unruly savages we colonials were. They were in shock about this fissure in the timeline; although, not nearly as shocked as the country already beginning to descend into a cultural fragmentation grenade I would come home to a few days later.

I wasn’t sure how to answer their question that day. The United Kingdom had a few months before passed their own titanic change of direction approving Brexit, the vote to leave the European Union. They were still trying to understand what it meant and who to implement the divorce they had voted for.

To many, the European Union was more than just a socialist cooperative economic model beginning to show the stresses of many years of the richer nations supporting the poorer ones. The EU was for them the culmination of a dream of a better that began on the 8th of May 1945, Victory in Europe Day. The people of Western Europe had endured the Cold War paying the price of post-war mobilization of NATO.

In the 1970’s⏤the beginnings of a shift from swords to plowshares in the form of the European Economic Community brought an inkling of a better future to people who finally began to feel that the ghost of the Reich would not return again. And then the European Union expanded that dream to see a world beyond the end of the Cold War.

To abandon such a thing, to possibly return to the individual nation state dangers of pre-NATO Europe, to abandon the safe space of co-dependency was a not an easy thing to wrap their heads around. Being from the other side of the pond and dealing with my own rumblings about what was about to transpire in the New World, I didn’t feel like over focusing on it. So my answer then was, “I don’t know. But we’re going to find out.”

In the two and a half years hence, we’ve witness the leadership of the two premier English speaking nations of the world take very different approaches to carrying out their election mandates of 2016.

Where the US’ President Donald Trump accepted the reality that social fissures laid bare by his election and used them to navigate a treacherous maze of opportunities and pitfalls to carry out his mandate, the United Kingdom’s Prime Minister Theresa May sought to find a solution through painfully inclusive social justice paths seeking to smooth over the social fissures that where also emerging in her country.

May tried three times to package the Brexit mandate as a universal compromise. She failed each time. Few doubt that she meant the best for her country. But equality of outcome for conflicted constituencies within her nation in a nation-state economic divorce was never realistic. Theresa May was trying to hang on the communal dream of EU co-dependency while working on a mandate meant to turn the English Channel back into a defensive moat. It was never going to work.

Prime Minister May’s mistake was strategic. By not allowing hard Brexit divisive forces to have sway alongside soft Brexit preservationist forces that would result in an imperfect, but functional, solution, she instead led her country into an infeasible dead end. She now pays the price for that mistake.

Her successor will most likely not make the same mistake. The odds are the United Kingdom’s next Prime Minister will be more like America’s Donald Trump who is using both division and inclusion as part of his toolkit to lead.

My own opinion is that this is good fo the U.K. May didn’t have the heart to make the tough choices of establishing the self-interests of her country versus the EU in clearer terms. She tried to be nice and succeeded only in creating a self-imposed gridlock condition.

I hope the next Prime Minister does not make the same error. Victory goes to the bold. The U.K. needs to be bold. The reality is that other European Union nations are looking across the moat hoping to see a model of the future they can follow; because the true future of a healthier European Union is one where real equity and merit within it, not imaginary social justice, drives prosperity and stability. Lest the minuet fissures that have been the reality of European conflict since the Hundred Years’ War continue to spread like a the cancer. A cancer that Brexit was meant to cut out.

So how would I answer the comparative question “Is this like Brexit?”

I would say no because of how we tackled the task. The reason is not because the United States didn’t have just as strong a mandate to “Make America Great Again” as the mandate of Brexit. We did. The words are American, but the intent is the same.

It’s because we’ve been bold about pursuing our mandate. We’ve ruffled feathers standing up for ourselves not because we are hegemonistic, that we want to conquer and rule. No, it’s because we seek fairness in the world. It’s a tough love form of coexistence.

That’s the lesson in national interest here for Americans as we ponder our own future. Our dangers are the dead ends of trying to create “designer outcome” compromises; the kind that Theresa May could not achieve.
Posted by Dennis Santiago at 7:59 AM