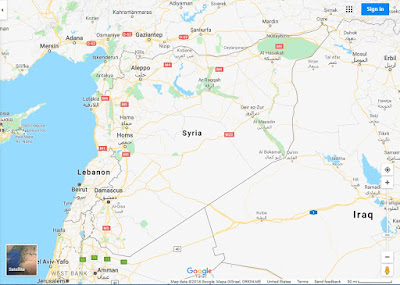 Acrimony and unease grip America’s global stability community as President Trump signaled his intent to extract the last remaining US advisors from eastern Syria. With his power as Commander in Chief, the President informed the entire diplomatic, military and intelligence arms of the US government that the end game point in the battle against ISIS for the United States has been reached. The outcry was immediate and vociferous including the resignations of Defense Secretary James Mattis and US Envoy in the fight against ISIS Brett McGurk in protest, their advice to maintain a long-term US presence in the region having been rejected. The US mainstream media, in an odd twist, went into a rare moment of introspective journalism asking if this meant the beginning of the end of Americas “endless wars”.

Elsewhere in the world, recrimination by French President Emmanuel Macron over the Trump’s decision included accusing the US of being an unreliable ally; for the record, Syria is a former French colony. The concern was echoed in the rest of the European Union with nations there asking if the EU needs to purse a global force projection agenda independent of United States leadership. Forces of Turkish President Recep Tayyip Erdogan began massing across from Kurdish held territory in Northern Syria clearly anticipating with relish the prospect that US is about to throw them under the bus.

But is Trump’s move reckless? Or does the president see trends in the world that he sees vital to the fate of a nation to step up to? Let’s look at the hand of cards he has.

The endgame of ISIS in Syria and Iraq is near. The philosophical threat of ISIS, the desire for an independent Islamic Caliphate, has receded into a nightmare for its supporters being ruthlessly hunted by everyone, ally and adversary. What is emerging now is a matrix of regional power players over which the US has a very weak hand in influencing directly. Syria is a playing field where the Russians, Turks and Iranians are going to sort it out at the expense of the indigenous natives including the Syrians and the Kurds; yeah same song, different stage. Who gets to be the next Armenians? Just saying.

Leverage in the Middle East going forward can only come from two things. One, is convincing the Russians that they don’t have to be there; that there are more important things to deal with like getting their tiny $1.3 Trillion GDP up and that 80 of 85 districts insolvent problem of theirs under control before they crater internally. Second is diffusing the potential larger war in the Middle East between nuclear armed factions possessing intermediate range delivery weapon systems. Meddling in Syria going forward by the US would make headway in these two areas of US national interest impossible.

The price? The natives. The Syrians. The Kurds. The Iraqis. The Afghans. The legacy of the 400,000 people who died because the United States naively believed we had the power to deliver them from evil. We got lucky in Grenada. Lucky in Bosnia. Lucky in Kuwait. We bit off more than we realized in Afghanistan and Iraq.

I can understand why James Mattis, who lost brave men and women under his command, and Brett McGurk, who forged deep friendship and trust with the natives in the fight against ISIS, would be deeply hurt by this turn of events. They fear for the next 400,000 people who will die in the coming decade if this new game doesn’t work.

And they are right to be fearful. The Fertile Crescent, the former Garden of Eden, has been a layer of Dante’s Inferno for a very long time. Personally, I’m not sure their leaving in protest at this time will help delay the onset of the deaths of the next half million. I’d have stayed to try to save the humans I could while this new strategy found its footing.

I will note that Donald Trump is not the first US President to attempt to end an “endless war” scenario. In the 20th Century, President Richard Nixon did the same over another former French colony painfully trading America’s national prestige for eventual regional stability.

Then the Bush-Clinton-Bush era made us bold because we took on the mantle of being the world’s policeman; the defender of universal human rights. The planet gladly let us while selfishly turning the surface of the earth into collection of locales where human rights are far from universal. We spent treasure and blood in a quest that was always going to reach a limit point; just like every crusade before it.

In the 21st Century, Donald Trump’s predecessor Barack Obama repositioned the United States to be a supporting character in world affairs as opposed to the prime mover of outcome agendas. With such a weak hand, the US must now find a path to world peace.

So help us God.

Posted by Dennis Santiago at 4:01 PM