Playing Hardball to Create Peace in the Middle East 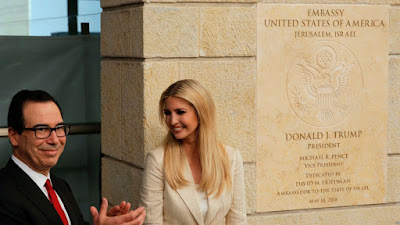 On the same day the United States opens its new embassy in Jerusalem, Hamas sends dozens to die in suicidal waves on the Israeli border with Palestine. Both moves are statements; one strategic, the other desperate. Seemingly at odds, when combined, the Middle East is saying it’s time to move on. In asymmetric stokes, the United States is declaring that the past is the past; that there is no peace in it; that the road ahead is new, unpaved, and uncharted. Hamas, one of the vestiges of that past, screams in agony that the ears in the region have gone deaf to their pleas.

The Middle East of the latter half of the 20th Century and dawn of the 21st has been a multi-party matrix of polarities based on volatile combinations of highly charged win-lose scenarios. This is not an area where win-win diplomacy has worked well. It is also not an area peace by force has provided anything more that temporary respite. Mostly, the Middle East’s core competency is grinding human flesh into meat. Both taking life and losing life have become commodities measured in hundreds of thousands of graves. Planet Earth has seen hundreds of thousands of innocent lives taken over the hubris of greed and power. Cousins turn into blood feud enemies. Neighbors on one day turn guns on each other the next. The reasons are many, almost all are pointless. Dreams of influence and power, control of trade and natural resources, ethnic cleansing for the sake of religious intolerance; all it’s done is left too many women who sell flowers and little boys who sell ice cream dead in forgotten ditches or splattered like paint onto the rubble of explosive debris. These examples are not fiction. Diplomacy, the kind that talks but does not act, has done little but keep the killing fields fertile.

Creating paths to peace requires choosing winners arbitrarily. Not by promoting self-determination; we already know the warring parties there’s choice is to perpetuate death as their coin of negotiation. Frankly, it’s how they milk the system. No. If we want real peace we need to take endless negotiation out of the equation. The world, or rather the powerful of the world, need to pick the outcomes and the pathways to manage the fate of the losers.

The Machiavellian model here is not democracy, it’s the marshaling of resources to impose better outcomes. The analogy that comes to mind is the taming of the American West. The latter 1800’s in America was a period when wars as a tool of statecraft were ending and the rule of law began to eclipse armies of occupation. The tool used for this was the US Circuit Court system of judges and marshals that had the power, in their individually jurisdictions to declare parties legitimate or outlaws; and enforce order under the shield of law accordingly. It eventually turned territories onto states that became self-governing with individually unique qualities; the American West the world knows today.

Let’s look at one facet of this puzzle. The clearest case for this ahead is in the country of Syria where stability is probably only possible by sectoring the country into imposed districts.

Northwestern Syria, the section held by Bashar al-Assad and this Alawites, is the new East Germany. It’s district judge is Russia. Its problem is the purging of what’s left of al-Qaeda and its various expressions of al Nusra and ISIS. Caught in this crossfire are the non-Alawite democratic factions that used to be part of a more inclusive Syria of a few decades ago but are in constant danger of teetering into the clutches of warlords who might turn the region into another Afghanistan. The conflict metaphor here is the sectarian governance of the Alawite model vs. the heavy-handed Salafist model of al Qaeda. The question for the world is how to enable the district judge to succeed in making sure the Alawite model prevails and northwestern Syria moves past the human rights sins of both Assad and his Islamist foes while seeking the restoration of broader inclusiveness in a post-Assad northwestern Syria. The latter is a challenge because the designated judge, Russia, isn’t exactly the most inclusive or tolerant of players.

Southern Syria is the section occupied by the Iranians. This is the westernmost projection of what is called the Shia Crescent, Imam controlled Iran’s dream of regional Middle East dominion. It is the powder keg and flash point of Middle East instability. The inability of Iran to get to the shores of the Mediterranean because the path is blocked to the west by the Israelis has been marked by military posturing and dueling that shows no sign of abating. This is metaphor here is immovable trench warfare. The only actual solutions are for either (a) Iran to abandon its agenda or (b) Israel and Iran to reach a peaceful armistice that allows for constructive economic conditions to emerge. For that, cooler heads, particularly in Iran, need to prevail. This is not presently feasible. Oddly, the decision of the US to abandon the 2014 Nuclear Treaty with Tehran actually creates a new basis for resolving the southern Syria issue by opening a pathway to tie Tehran’s regional behavior not just in Syria but in the Nineveh Plains of Iraq to a new round of negotiations. The gambit is reinforced by the US overture inviting participation by Saudi Arabia and the Gulf States, who are showing encouraging signs of liberalizing proactively, to help stabilize eastern Syria. The move, in military parlance, closes a salient created by the Iranians during the ISIS period further pushing them to an inevitable negotiated outcome. This is bold move stuff being pushed by cool cucumbers like US president Donald Trump and his team. A second Nobel Peace Prize would be well earned if it works.

Eastern Syria is the American sector. This is about as close as it gets to the frontier conditions of the American West of the 1800’s; where the American military occupies and patrols in a role more akin the the U.S. Cavalry of the Wild West. We sit on a powder keg on the knife edge of military governorship. And regionally, this is the most difficult sector to possess. Where western and southern Syria are set piece containments, eastern Syria harbors a flashpoint for a far broader regional breakdown. It’s because of the Kurds. A partner to facilitating America’s occupation agenda, the dream of an independent Kurdistan holds within it a war that would engulf Syria, Turkey and Iraq for a century. It may be ok with the Kurds who see only their hopes with myopic intensity; but everyone else who looks into this abyss sees casualty numbers that would equal if not exceed what the region has already suffered. The US has counseled both patience to the Kurds, difficultly, and accommodation by the sovereign nations within which the Kurds live, with even more difficulty. It will test the United States’ ability to reluctantly manage conflicting party coexistence over a long term yet again. On the plus side, there is probably no other nation on earth whose own history of being forged out of diverse dissonance can ascend. Perhaps that is why God has placed us in that part of the His former Garden of Eden at this point in human history.

We do stand a chance at this. The philosophy of “nation building” American-style has been applied in other tumultuous environments with success. The United States, under the command of Douglas MacArthur, used similar methods to stabilize the post-Spanish Empire colony of the Philippine Islands in the early 20th Century. MacArthur, a product of a flowering of other statesmen-generals like Marshall, Eisenhower, and others who saw the world stage as manageable, repeated the formula again in post-Imperial Japan after World War II. The United States, post MacArthur, did the same in a place called South Korea; a country that is about to bear the fruits of America’s sixty-eight (68) years of patience and commitment. Anyone who tries to tell you the USA doesn’t have the ability or skill to play the long game, don’t you believe it. We have, many times.

The only times we’ve lost on this planet is when we’ve abandoned and left regions to wallow in their own misery. The vacuum effect of our missing influence has been consistent; slow economic recovery in places strewn with uncleared minefields and, in too many instances, death due to gang warfare between criminal warlords. We’ve learned a little that our choices have consequences, probably not enough. But maybe enough to give the world a few more miracles to remember.

I’ll close by noting that I’ve written about his subject in the past. The last time I pointed out that the United States must ponder the long-term implications of our destiny on the world stage was 2003. At the time, we were arguing about the weapons of mass destruction of one Saddam Hussein and debating whether to invade Iraq. I wrote we’d have to have the stomach to stay for at least 75 years to do it right. I recall at that time there was another fellow being quoted as saying similarly pensive things.

His name was Donald J. Trump.

Posted by Dennis Santiago at 12:28 PM